Let's begin by explaining that the Work

done by a Force

In the case of this rectangular aquarium (see figure attached), we know its initial volume

(which is the same volume occupied by water, because the tank is full) is:

In addition, we know the force needed to pump a small amount of water is:

On the other hand, we know the density of the water

is given by the following equation:

is the mass of water and

is the volume of a thin "sheet" of water.

Now, we are asked to find the work needed to pump half of the water out of the aquarium. So, if the aquarium is

deep, the half is

Well, in order to solve this, we have to write the definite integral from y=0 mto y=0.5m: 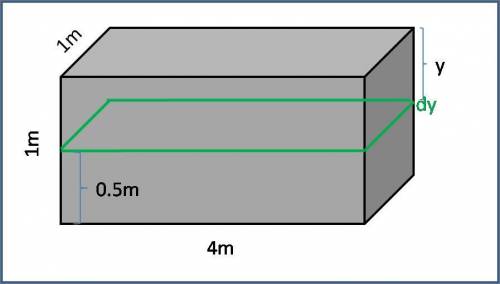 i have found an answer to your question but use it as information.

the answer should be in the picture.

Other questions on the subject: Physics

Physics, 22.06.2019 17:10, MrTeriffic
Which statement describes one way in which global winds affect weather and climate?
Answers: 1
continue
You know the right answer?
An aquarium 4 m long, 1 m wide, and 1 m deep is full of water. find the work needed to pump half of...

Mathematics, 02.07.2021 06:10
I need this fast An official stands 2 meters from the edge of a discus circle and 3 meters from a point of tangency. Find the radius of the discus circle. Show work....

Mathematics, 02.07.2021 06:10
For a project in his Geometry class, Mamadou uses a mirror on the ground to measure the height of his school’s football goalpost. He walks a distance of 13.75 meters from his schoo...