Which of the following is not true about issac stevens, the first territorial governor of washington? he was friends with president franklin pierce. he graduated first in his class at west point academyhe reluctantly accepted the job as governor. he served in the mexican-american war.

The false statement is He reluctantly accepted the job as governor.

Stevens was a controversial governor and today is considered even more controversial, especially for his actions regarding the Native American tribes of Washington. He would not hesitate to use troops for vengeance or intimidation and forced the tribes to sign treaties ceding most of their lands and rights to the government. The Governor reached a point of imposing martial law in order to impose his will on Indians and opposition.

Answer from: Quest
Iwould say a, due to the fact these routes display many things that would be useful and provide explanations for how states are known. 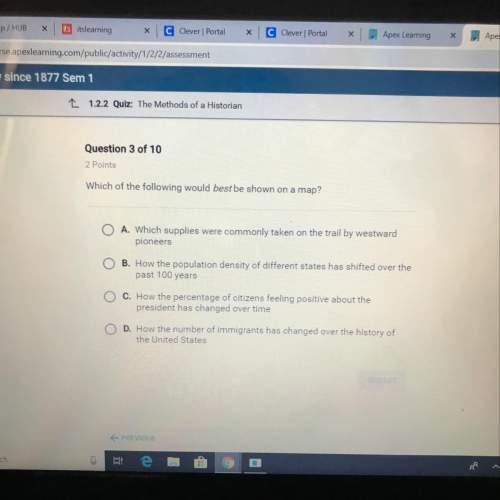 Other questions on the subject: History

History, 21.06.2019 18:00, jonathanvega424
I’m annoyed but glad that my history teacher left and quit her job as a teacher to become a flight attendant
Answers: 1
continue

History, 22.06.2019 04:20, pryncesz2859
Why were americans concerned about the future of north and south america? check all of the boxes that apply. they worried that european countries would take over independent countries in latin america. they thought that european nations could threaten democracy in the united states. they believed that europe would never again return to the americas.
Answers: 1
continue

History, 22.06.2019 05:20, natishtaylor1p8dirz
What was feudalism? (define the structure)
Answers: 2
continue
You know the right answer?
Which of the following is not true about issac stevens, the first territorial governor of washington...